Bathtime is an important part of our bedtime routine for our toddler. It didn’t start out as a routine when she was a baby, but putting her to sleep was taking over 30 minutes, and implementing a routine was suggested. We started doing bathtime every night, then reading a story from her baby bible, then going to bed. It has really helped shorten bedtime and now when she’s tired, we will ask her if she wants to take a bath and she will often nod her head. She loves to play in the water.

These are some of Lily’s favorite bath toys.

We have not tried giving her scoops and tupperware in a few months, because she always wants to drink out of them. One of my friends suggested bringing her water cup in so that she could have drinking water and not drink the bath water, but she still drank the bath water. So until she outgrows that, we’ll stick to squirty animals, boats, and this pouring caterpillar toy. The caterpillar toy comes with little shapes and scoops, so we’re teaching her to not drink out of the scoops. Instead, she dips her fingers in the scoops and slurps water off her fingers. (I decided to not fight that battle, gotta pick and choose which battles to fight!)

On Pinterest you can find how to make colored shaving cream that your child can play with and wash off in the tub. They also make bath crayons but I haven’t personally tried them out, because my daughter immediately tried to put it in her mouth.

This is the baby bath tub we used. 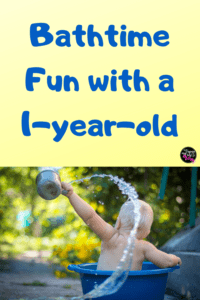 7 of our Favorite Baby Books

Why I Chose to Breastfeed

Signup for news and special offers!

Any cookies that may not be particularly necessary for the website to function and is used specifically to collect user personal data via analytics, ads, other embedded contents are termed as non-necessary cookies. It is mandatory to procure user consent prior to running these cookies on your website.

Enter your name and email and stay up to date with us!

Introduce yourself and your program
The information you provide on this form will only be used to provide you with updates and personalized marketing. Your privacy is important to us! We will send you occasional emails about promotions, new products and important updates to keep you in the loop. By clicking subscribe, you are choosing to opt in for news and updates.